Wondering how to amplify your harp for gigs? Well over the years I have pondered this question at length but recently I think I have found a way that sounds pretty good and is relatively easy to set-up. Originally I tried the oyster mic option with a quarter inch lead straight into an amp. A lot of people are happy with this option and although it is simple, I just didn’t think it sounded all that great. I also didn’t like the way I had to adhere the mic to the harp soundboard using a bit of putty like blue tack. The putty left a residue behind on my soundboard that was difficult to remove and after a while it started to lose its stickiness so the mic dropped on the floor regularly. (I ran out of putty so was starting to think I had to use blue tack on my harp!) A couple of years ago I bought the lever harp of my dreams and I wanted to find a mic option that didn’t damage the harp in any way. My harp is also very resonant and can easily sound muddy in the bass so I wanted an amplification system that gave me a nice clear, undistorted sound. After reading a lot of reviews and researching the alternatives I decided to buy a specialised harp microphone. I couldn’t try one out because being in Australia no one stocked harp microphones and I didn’t know anyone who already had one so I took a deep breath, hoped for the best and bought an AMT P43s (Applied Microphone Technology) online from the USA. It wasn’t the cheapest microphone to buy but I decided that as I was a professional musician I needed to spend a bit of money to get something I was happy with. They usually retail somewhere around $400 USD but I have seen them as low as $343 USD online if you shop around. AMT make microphones for many different acoustic instruments so I thought they would have a fair idea of what they were doing. I also knew from my studio recording experiences the importance of having a really top quality microphone.

In terms of your set up and actually using the mic you need to understand that it is a condenser microphone, which is very sensitive, but doesn’t have its own power source. Instead it needs ‘phantom power’. In other words, the mic needs to draw power from somewhere else. If you take the mic home, attach it to your harp and then plug it directly into your amp it won’t work! Unless, of course, your amp has a phantom power supply (which some do but most don’t). When I bought the mic I was thinking mainly of using it in festival performances and other situations where I could plug straight into a mixing desk with phantom power. Once I started using the mic though I discovered that I really liked the sound it produced and wanted to use the mic more. So I bought myself a small phantom power box that has XLR input and output sockets as well as a USB connection. With this little box I can plug my mic into the input socket and then connect to an amp using the output socket. Now I can use the AMT mic with my own portable amp for small gigs or plug directly into a mixing desk at larger ones. The USB connector also has the added bonus of allowing me to record using the mic by connecting straight from the phantom power box to my computer. The whole system works beautifully and is easy to set up and carry. Now I am thinking about trying a small mixing board instead of the phantom power box to give me more mixing capability than my amp allows when I work with a vocalist or another instrument. I am very happy with the AMT mic though, the sound is terrific and the clamp attachment means I don’t have to damage or alter my harp in any way to use it. I can also easily use the mic with any of my other harps if I want to.

To have a look at the mic go to: 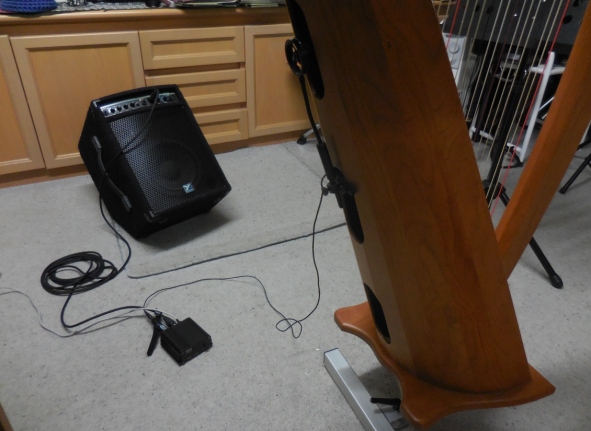 Set-Up showing mic connected to Phantom Power Box and then into the amp. 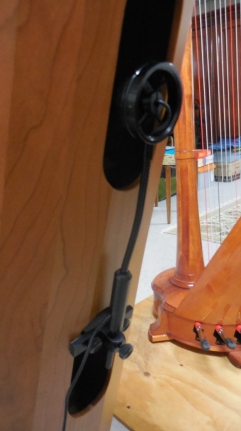 Close-up of the mic attached to my harp.